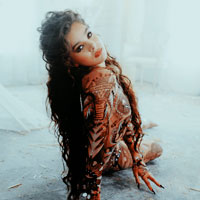 Actress, singer and producer Hailee Steinfeld is set to release a new single entitled “Afterlife” on Sept. 19, a track she created for her upcoming Apple TV Plus series,”Dickinson.”

“This is a song I’m incredibly proud of, and I feel like after embodying this character, I have a more fearless approach to my writing,” Steinfeld shared at the Tribeca TV Festival in New York City on Saturday Night.

“Dickinson,” a period piece about Emily Dickinson with a modern, comedic twist, is Steinfeld’s first-ever full time television series, and with it she experienced another big first by unveiling the show at the event: “Dickinson” is the first Apple TV Plus series to debut to the public, and it did so well-ahead of the Nov. 1 launch of the new streaming service.

Series creator and showrunner Alena Smith described “Dickinson” as a “crazy psychedelic version of the 1850s.

“It’s this giant weird crazy collage, and the music is this direct root straight into her brain,” Smith explained. “With Hailee as our lead, who has a double life, as also a pop star and musician…my hope is that the music will make you feel everything that Emily has trapped inside and wants to burst out.”

For Steinfeld, who doubles as an executive producer on the half-hour series, the music was a main factor in drawing her to the project. The music of Billie Eilish, for example, is a backdrop to the show, and “Dickinson” even brought on rapper Wiz Khalifa to play Death in a guest role. (Other guest stars include comedian John Mulaney and “Girls” alum Zosia Mamet, who’ll do a parody of Louisa May Alcott.) The modern-day additions serve as tools to help convey thoughts within Dickinson’s mind, which are depicted here as wild, whimsical and far more imaginative than what is usually assumed to be the static life in which she was living in 19th century Amherst, Mass.

“She sits in the corner of her room [writing] and looks out the window and there’s a world out there — but even a bigger one in her mind,” Steinfeld said, adding that the show has “incredible comedic moments and this dark humor and dramatic moments and everything in between, and it really reflects everything in her poetry, which is every possible emotion.”

“She broke all the rules of her time, sort of in secret,” Smith added. “Spoiler: her life was boring. Not a lot happened…the action was in her head.”

Although the series is set in the 1800s, the team behind the show feels its themes are relevant to today’s social climate highlighting women’s voices, as Dickinson is portrayed as a self-assured young woman who knows she has more to offer to the world than the housewife-in-training life she is living.

“The basic idea here is if Emily wasn’t understood in her time, maybe we can better understand her now,” Smith said. “I once read this thing that said period shows make the best feminist TV because when things were more exaggerated, we can perhaps look at how things aren’t so different today.”

Jane Krakowski, who plays Emily Dickinson’s mother in the series, said she’s still figuring out how strongly comedic the show should be, but noted, “I think the parallels between young women today and Emily Dickinson will resonate with a modern generation.”

She also pointed out that she believes the show can inspire young women to pursue their passion and dream beyond the life they’ve been born into. “A lot of this generation this this show is aiming to, or certainly the fans that Hailee is going to bring in, don’t really know Emily Dickinson or don’t know her poems,” Krakowski said, “and I think it will be wonderful to introduce a whole generation of young, feisty girls who want to make a mark on the world to Emily Dickinson.”

Steinfeld agreed: “What’s really cool about this show is when you’re watching it, you kind of forget that it’s a period piece,” she said. “Speaking personally as a young female, there definitely are parallels. The pressure that Emily Dickinson is under to feel or act or do certain things, I think women still feel that way. … We hope that people see this and feel seen and feel heard, because that’s exactly what Emily was searching for, to be understood. … It’s crazy and it’s wild that we’re searching for that [in 2019] — obviously way less — but it’s still an issue.”

On a personal level, Steinfeld added that she has truly “felt this newfound fearlessness after learning about this character.

“I just feel in my work, in my life, in my relationships, in where I stand with certain people, a sense of fearlessness. And I hope everyone will find a little bit of that in the show.”

The third annual Tribeca TV Festival is about to have a wild night. The premiere of Apple TV+’s fall comedy series Dickinson starring Hailee Steinfeld will headline the New York fest, which takes place September 12-15.

The half-hour series will screen ahead of its September 14 TV premiere and will be followed by a discussion with Oscar-nominated actress Steinfeld, who plays the titular writer; Jane Krakowski; and series creator, showrunner and executive producer Alena Smith (The Affair, The Newsroom). Toby Huss, Anna Baryshnikov, Ella Hunt and Adrian Blake Enscoe also star.

Dickinson isn’t a normal historical series with bonnets, corsets and proper ladies. The comedy subverts all of that as it audaciously explores the constraints of society, gender and family from the perspective of the rebellious young poet, Emily Dickinson. Set in the 19th century, Dickinson is a coming-of-age story that finds the author to be an unexpected hero for our millennial era.

Now in its third year, the Tribeca TV Festival is an extension of the Tribeca Film Festival and puts shine on episodic storytelling — no matter what format. The fest included world premieres of hotly anticipated series inlcuding Chernobyl, The Hot Zone, The Handmaid’s Tale, Genius and The Night Of.

Dickinson is a half-hour comedy series starring Oscar® nominee Hailee Steinfeld. Dickinson audaciously explores the constraints of society, gender, and family from the perspective of rebellious young poet Emily Dickinson. Coming this fall to the Apple TV app with an Apple TV+ subscription. Subscribe to tvpromosdb on Youtube for more Dickinson season 1 promos in HD! 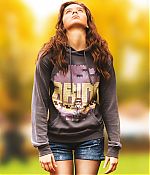